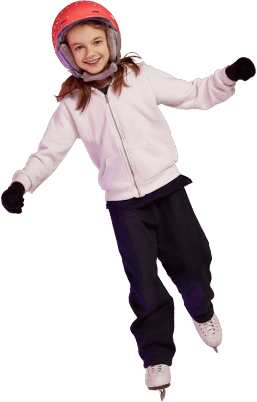 Skate on a 750 m track encircling the Mega Parc

Patinarium is not included in the unlimited access wristband. A different reservation must be made to have access.

Rental and services offered on site :

The skaters must adapt their speed and behavior to the others on the ice. None of the following objects are tolerated on the ice: chairs, strollers, hockey sticks, backpacks and other objects which could affect the security of other skaters. We reserve all rights to refuse access to the ice rink to anyone not respecting security rules deemed appropriate by our attending personnel. In addition, children under 30 inches are not allowed on the ice. All children must be able to walk stably without the assistance of an adult to be allowed on the ice.

IT IS STRICTLY FORBIDDEN TO:
• drink or eat on the skating rink itself;
• sit or to place objects on the edge of the boards;
• sit a baby on a skating aid. The skating aids are not designed to be used as a stroller;
• stop or form groups along the side of the rink; skate backwards, zigzag or skate in the opposite direction;
• figure skate or practice speed skating;
• wear speed skates on the ice;
• play games of any kind (such as TAG)
• practice hockey (including Stop & Go exercices);
• be on the ice when being resurfaced;
• carry a child in your arms or in a baby carrier while skating;
• throw objects on the ice;
• use cones on the ice.

We highly recommend to wear a helmet as well as gloves and full length clothing; especially for children and inexperienced skaters.

Do not get on a ride if you are intoxicated; have had recent surgery; have problems with your heart, neck, or back; have high pressure; are pregnant; or have a physical condition that may be aggravated by the ride.

All Mega Parc users agree to release, indemnify, and hold harmless Galeries de la Capitale, its owners, managers, representatives, along with its officers, employees, agents, mortgagees, successors, assigns, and all other persons for whom they are accountable before the law (collectively the “Releasees”) of any obligation, action, cause of action, claim, damage, lawsuit, expense, or request whatsoever that they may have at this time or that they may hold against the Releasees for any personal injury (including death) to themselves, to their children, or to any other person(s) under their responsibility, or for any property damage resulting from their use, or that of their children or any other person(s) for whom they are responsible, of Mega Parc and the amusement rides therein.

Please note, to be eligible you must send in the completed form at least thirty (30) days prior to your event date. We will not process any sponsorship requests submitted on paper or by phone.

Méga Parc is currently closed in accordance with government instructions and will remain so until next March. The health and safety of our employees, customers and our community is a top priority. We are grateful for the commitment and patience shown by our customers and we look forward to the day when we can resume our full activities and thus reposition Méga Parc as one of the leading indoor amusement parks in North America.

In the meantime, Patinarium remains open – albeit at reduced capacity – in order to maintain physical distance. We will continue to follow instructions from the government and health authorities in operating this attraction.

Our best wishes for the holidays to come!